Two Sermons on The Wedding at Cana 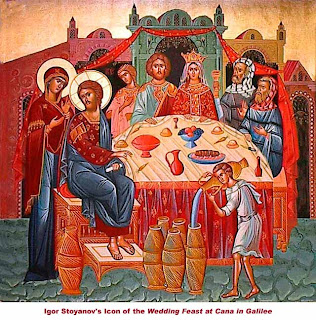 As is my custom, if someone asks for copies of my sermon notes I stick em up on my Scribd page, just in case anyone else might want to go get 'em.  This weekend I preached two different sermons from the same passage.  Yesterday was the ordination service of one of our students, John Thompson, at Princes Drive Baptist Church in Colwyn Bay.  We read John 2:1-11, the wedding at Cana, and I used the the story to highlight lessons about the nature of ministry.  This morning I was preaching at my own church, Chorlton Central in Manchester and read a scripted imaginative retelling of the same story, from the perspective of watching angels.  Anyhow, as I said, if you want the notes pop across to Scribd and help yourself.
Posted by Glen Marshall No comments:

Kitsch Jesus in the Smelly City

Back in the day I posted a blog about meeting God on Market Street in Manchester. That encounter prompted me to develop some material on Urban Spirituality for our MA course on Spirituality in Contemporary Culture.  This in turn spawned a framework for a half-day city centre retreat which has been taken up by friends and students for use in Prague, Stockholm and Birmingham.

This week here at Luther King House we've been teaching the Spirituality module on our MA Summer School.  We ran the city centre retreat again.  It got lots of positive feedback from the students.  It also gifted me with another unexpected encounter with Jesus.

I wasn't actually doing the retreat myself this time but I was in the city, buying bread and wine for the communion on the street that would round off the day.  I was making my way through the Northern Quarter on my way to Methodist Central Hall for our retreat debrief when God's Spirit beckoned me into a seedy night club back entrance.  I like to use back streets whenever I can.  It makes walking more of an adventure.  I'm not sure what The Spirit used to grab my attention, in fact I haven't a clue, but I found myself walking over to take a peek. 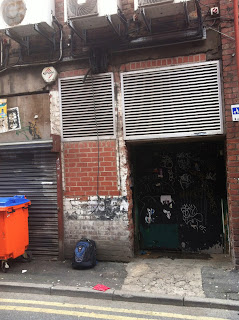 And there, in a stinking, piss-soaked door-well was Jesus.  (Apologies if the word piss upsets you, I don't mean to offend, it's just that neither wee nor urine are quite up to the job.) 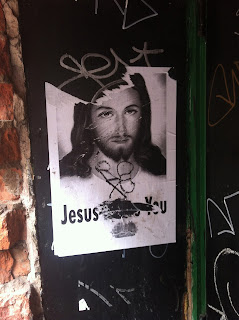 I realise this is a rather kitsch Jesus, but I was in the Northern Quarter where they do kitsch rather well.  So it sort of fit.  It also fit because it seems to me it's just the kind of place you'd expect to see Jesus.  Or at least the kind of place where you ought to expect him.   How fitting too that he'd been defaced.  They'd scrubbed out the word love.  Or at least they'd tried to.  True the letters had been erased but the word's still there don't you think?  Again, it's the only word that really fits.

... he had no form or majesty that we should look at him, nothing in his appearance that we should desire him. He was despised and rejected by others; a man of suffering and acquainted with infirmity; and as one from whom others hide their faces he was despised, and we held him of no account.
Surely he has borne our infirmities and carried our diseases; yet we accounted him stricken, struck down by God, and afflicted. But he was wounded for our transgressions, crushed for our iniquities; upon him was the punishment that made us whole, and by his bruises we are healed.

Lord, we pray for all who use that door-way.  And we pray for ourselves. Please beckon us into uninviting places.  Meet us there and open our eyes.  And if need be our nostrils.  Amen
Posted by Glen Marshall 2 comments: