Just got back from a weekend in Yorkshire joining in a wedding. It was a good un. It also sparked off some half-baked thoughts for the blog. I’ve been needing them in my head for the past 24 hrs and now’s the time to stick them somewhere cosy to see if they will rise. It would be good if you could spare the time to lift the corner of the tea towel, take a peak and let me know what you think. Here they come.
Posted by Glen Marshall 1 comment:

Email ThisBlogThis!Share to TwitterShare to FacebookShare to Pinterest
Labels: Weddings

One of the challenges of putting this particular wedding together must have been the different stances that the bride and groom take towards Jesus. She is a dedicated follower of Christ, the kind that gives Christians a good name; he is a number of steps removed from the mainstream of Christian orthodoxy but the kind of bloke who contributes far more to the richness and rightness of life than many a full blown true believer. The service had to reflect this difference. Clearly a lot of thought went into this and I think it worked really well … but I’m not sure.

Take the songs for instance. They were neither the all-stops-out, full-blooded organ type nor the worship-band, isn’t-Jesus-lovely type. Alongside the overtly Christian Day by Day and Go Peaceful we had Carole King’s You’ve Got A Friend (listen to the soloist and all join in on the chorus) and Bill Withers’ Lean On Me (again cantor and congregational participation). At one level all of this made perfect sense. The groom is a pretty nifty musician, in fact he accompanied the singing on what, from where I was standing, looked like a ukulele, which is also why, alongside the Bible readings, we had snippets of lyrics from classic pop songs.

As I say this made sense but it also felt a bit weird. I’m not used to belting out folk/rock anthems together with a congregation of people in two piece suits or fancy hats. No doubt though it would have been just as weird and slightly less honest for some of the guests to have had to sing full on Songs of Fellowship love songs to Jesus. I’m still trying to get my head and my gut to line upon this one. It does raise an some interesting questions though, questions that many engaged in missional thinking, doing and being would do well to address.

How far do we go in making the Christian faith accessible and amenable to those whom we would like to step inside? How many of the things we do can we strip away while still being true to ourselves? Is this approach genuinely hospitable or does it smack of trying just a bit too hard? Is there a sense in which if we translate our ways of addressing and speaking about God into another language we will no longer be able to speak authentically about God – or at least about our God?

The momentum behind much contemporary mission thinking is undoubtedly towards translating the faith and making it accessible. There are good reasons why this is right and proper, not least the incarnation. But there is a problem with this kind of move: Christian truth is not just distinctively true it is also a distinctive kind of truth and as such depends for its articulation and appropriation on a distinctive kind of language and a peculiar set of practices. To translate is to change and while such change can enrich our appreciation of truth it also runs the risk of irretrievable loss. No doubt unnecessary jargon can get in the way but we just can’t do without our own technical, insider-language.

While it behoves us to reflect on what we mean by terms such as redemption, salvation, sin, discipleship and church but I think we would be wise not to ditch them entirely. Explaining what we mean when we speak and why we do what we do is important but abandoning our native tongue and ditching practices that have always shaped us is not a smart move. We will end up with an accessible but drearily thin form of the faith that may well be instantly palatable but ultimately not very nourishing. Perhaps we ought to give more attention to teaching those who are interested how to speak our language and carefully initiating them into our distinctive ways. But, I hear you say, all this is a long way from the wedding, so to conclude, ladies and gentlemen, I give you … the best man.

On this occasion the groom’s side-kick performed his major part in the British wedding rite with great aplomb. The speech was a cracker - definitely one of the top five I’ve ever heard. (There’s an idea for my side bar.) What made it interesting was that he was - I think - from the none-church going bunch. I don’t know if the bride was at all nervous about the tone of the speech. Some best man speeches I’ve heard would definitely make a vicar blush. This guy got away with it though (at least this particular “vicar” didn’t blush). No doubt some were offended by one of the gags – the funniest of all. He might have got away with even this joke if he’d used the word Onanism instead. But then only the Bible readers in the audience would have got it – and it wouldn't have been nearly as funny. Thing is he was careful enough with his language but not so careful that it became flat or inauthentic.
Posted by Glen Marshall 3 comments:

As I’ve said the wedding was good ‘un. One of the crucial ingredients was definitely friendship. The bride and groom are, to differing degrees, part of a truly remarkable network of friends that has been sustained and matured over the past fifteen years. It has been fascinating to observe and to a certain extent participate in this network of friends. It is marked by great openness, remarkable hospitality, genuine care; an ever shifting, labyrinth of relationships, a kind of This Life with added Jesus.

It was the friends and the way they mucked in with admirable commitment and genuine skill that made this wedding so right. And it was reconnecting with this network that brought to mind an important lesson about church: it’s impossible to make church work well unless you grow real friendship.

In my table of key indicators of a healthy church, friendship would be pretty close to the top. People enjoy church and stay there when they find friends. Fostering friendship has to be one of the most important skills a church leader can develop. If we aspire to a flourishing church community we ought to treasure and encourage those who have the spiritual gift of parties, the born (again) conveners of conviviality.

(Out of interest does anyone out there know of any decent theologies of friendship or any substantial work on friendship and church growth?)
Posted by Glen Marshall 3 comments:

OK so this last post on Saturday’s wedding is a bit contrived and yes it does overlap with the last one but the obsessive compulsive in me couldn't resist completing my list of matrimonial homonyms.

The wedding was a good ‘un because it was by and large a D.I.Y. job rather than a more up tight, glitzy and obscenely expensive effort. This is what made it. The video, the dress, the cake, the photographers (all four of them) the decoration of the church, the bar staff, the desserts, the (admittedly rather grand) back garden were all so good because they were so amateur. Amateur in the best possible sense of the word – done for love not money. Hope my daughter reads this.
Posted by Glen Marshall 1 comment:

Email ThisBlogThis!Share to TwitterShare to FacebookShare to Pinterest
Labels: Weddings

Why?
– It’s been good fun reading the blogs of various friends and acquaintances and it seems churlish not to join in. Doing it is nearly always better than looking on while others do it.
– I hate the feeling of being left out.
– Maybe it will help me try out and straighten out some of my ideas.
– Perhaps it will give me a chance to be a bit creative.
– Undoubtedly I’m enough of an exhibitionist to enjoy having an audience.

Why it’s probably a mistake:
- Another tempting device added to my procrastinator’s tool kit.
- I will probably be the world’s least regular blogger – I’ve always been better at starting than finishing.
- If I do stick at it I will almost certainly end up revealing more of myself than is good for me. Or even worse revealing just how little of me there is to reveal.
- Undoubtedly I’m enough of an exhibitionist to enjoy having an audience.

So once again insecurity and the urge to show off win out over caution and good sense.
Posted by Glen Marshall 6 comments:

Email ThisBlogThis!Share to TwitterShare to FacebookShare to Pinterest
Labels: Miscellaneous 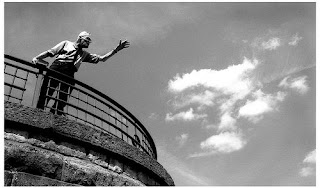 It’s friendly – nah then is a form of greeting where I come from: “Nah then Bill, fancy a pint?” Hopefully this will be a friendly place to visit. Pronunciation guide – when used in this sense accent the second word.


It indicates logical progression – as such it became my first ever homiletical mannerism. As a teenage preacher whenever I wanted to make a link between one block of a sermon and the next I would pause, and say, "Nah then" before continuing. Hopefully the entries on this blog might have a whiff of the logical about them. They will also from time to time touch on preaching.  Pronunciation guide – when used in this sense accent the first word.


It’s northern – a useful reminder that roots matter and of course there are no better roots than northern roots; after all Jesus himself was a northerner. More pompously, as a northern expression it is a useful reminder that the eternal Word must always speak with a local accent. Abstract universal truth that never touches earth in a particular place at a particular time is not a lot of use to anyone.

Just in case you aren’t as blessed as me n’ Jesus, nah then translates as “now then”.
Posted by Glen Marshall 9 comments: